One thing I love about 3D printing is that it teaches you how to deal with failure. Lots and lots of failure. Every design I make ends with a pretty picture but starts with a stack of failed prints, and each one of those failed prints tells me how to redesign my model to be a little bit better. Printing a model to see how it is working is cheap, fast, and easy when you have a 3D printer, so you can literally “design to fail”, that is, make a design that you know isn’t quite right but then print it, learn from it, and fix your model or print settings accordingly. Failure is actually an active part of my design process.

The process of try/fail/try again is something that many of my math students have difficulty with; they can remember and repeat tasks but they often have trouble being creative and solving problems. For the calculus geeks out there, consider the difference between differentiation and anti-differentiation. Differentiation is simple for most functions and it would not be hard to write a computer program to do it; the process doesn’t require much creativity. Anti-differentiation is another story; for example, the functions 1/(3x^2+2), x/(3x^2+2), and (3x^2+2)/x are fairly similar, but their antiderivatives are wildly different (one involves arctan, one involves logarithms, and one is a polynomial). Finding these anti-derivatives requires a willingness to make a guess, test out the guess, and then re-guess accordingly, and students have a lot of trouble doing that when they first encounter anti-derivatives. A lot of them don’t like to try things that they aren’t sure will work, and in addition are reluctant to try again when they fail the first time.

I hope that the use of 3D printing and modeling in K-12 schools will help my future students learn to fail. And how to pick themselves up, dust themselves off, and fail all over again. And again, and again!
So in celebration of failure, I’ll stop hiding my catastrophes and put them up here for all to see. This week’s Friday Fail is a collection of hinge tests for a project we will be posting later this week. The design is based off our old Print-in-Place Fidget Cube model, written in OpenSCAD. Some of the modules in the new design have angles of much less than 90 degrees that need to have hinges, and this causes a problem with stability and reliability. So we’ve been testing, retesting, coding, and recoding until we get it working just the way we want. Here are some of the failures that helped us on our way today: 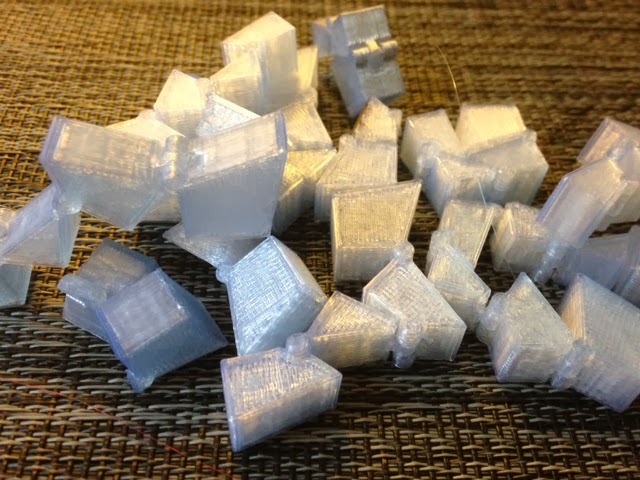