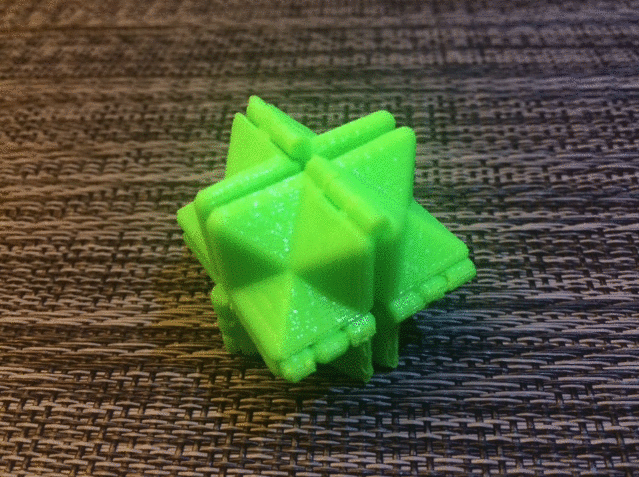 Absurdly, now that I’m actually working at MakerBot I seem to have stopped posting models to Thingiverse… until now.  Thanks to 3D-printing hero atartanian, I’m now in a knock-down, drag-out, winner-take-all*, print-a-thing-every-week battle. It’s been too long, I’m glad to be back.

My entry for Week 1 of this design/productivity challenge is a remix of my Fidget Cube model called the Fidget Star:

Why mess with the Fidget Cube?  There are three answers.

1. The Fidget Cube makes puppies cry, if by “puppies” you mean “3D printers,” and by “cry” you mean “sometimes fail to print successfully.” Part of that is due to the fact that you have to get the hinge clearances just right for the model to print successfully, and that those clearances can vary for different printers.  But part of it is my fault: the demo models that I posted with the original Fidget Cube design could have been better optimized, and the Customizer was a bit more complicated than it needed to be; I wanted to fix those issues so that more people could easily print the Fidget Cube successfully.

2. Gregg Knapp posted an amazing video on YouTube in which he showed the Fidget Cube printing while folded up. This was completely badass and when I saw that video, I immediately wished that I had made my original model that way.  He made the folded-up version by using Blender to modify an STL of the Fidget Cube. I did the same thing by modifying my OpenSCAD code, so that it could still work in the Thingiverse Customizer.

3. Of course, to make a *star*.  I’ve always wished that I could modify the Fidget Cube design so that two could be nested together to make one of the most amazing objects I have ever seen: the Yoshimoto Cube (you can get one on Amazon called Magic Star).  There is a nice model of a Yoshimoto Cube on Thingiverse by designer 2ROBOTGUY, but it’s for one that you print pieces of separately and then assemble; I wanted to make one with print-in-place hinges.  Sadly, this is not possible, at least not within the scope of my existing Fidget Cube design. The hinges get in the way of the nesting.  However, we can be halfway happy: the Fidget Star is one-half of a Yoshimoto Cube.  That means that in its star configuration, the Fidget Star is a Stellated Rhombic Dodecahedron, which is exactly half of the volume of the cube formation it makes when folded the other way.

The end result is a model that 3D prints in its folded cube-state, but unfolds to a surprising Stellated Rhombic Dodecahedron shape. And this time I included demo models that are optimized for printing on most 3D printers. You can still use the Customizer if you need to tweak things a little more. Go get it:

On the other side of the ring we have atartanian, undisputed Customizer grand master, and in fact one of the people that created the Thingiverse Customizer App.  His Week 1 battle entry is, of course, something customizable: Flexible Toy Train Tracks! 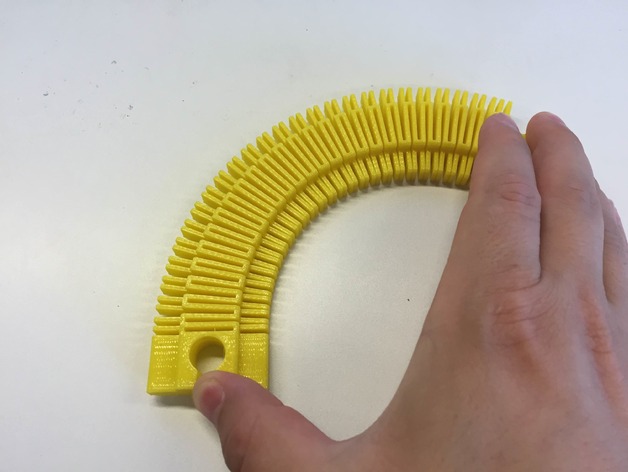 What can you customize about this model?  Basically everything, from length and width to the clearances, thicknesses, and connector properties.  It prints beautifully and is flexible not only side-to-side as you see in the picture above, but also to make hills and valleys.  The lineage of this model is pretty amazing, as it comes from a long list of remixes: atartanian’s customizable Flexible Toy Train Tracks model, built from the ground up in OpenSCAD, is a remix of romanjurt’s Tinkercad creation Brio Flex Railtracks. That model was itself a remix, of moli’s Standard Brio Tracks, which was itself a remix of clothbot’s Sketchup-created model Toy Train Track.

I look forward to next week’s battle (tomorrow, actually!) to see what atartanian cooks up.  I think he has some surprises up his sleeve… and maybe I do too…

* Here “winner-take-all” has the usual meaning, which is that whoever fails to post a model by end of the day each Friday has to purchase beer for the other. High stakes! 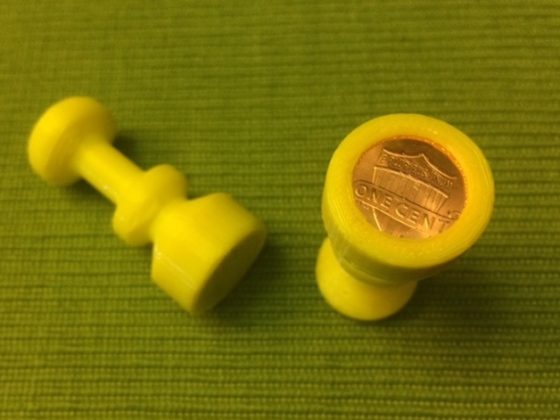 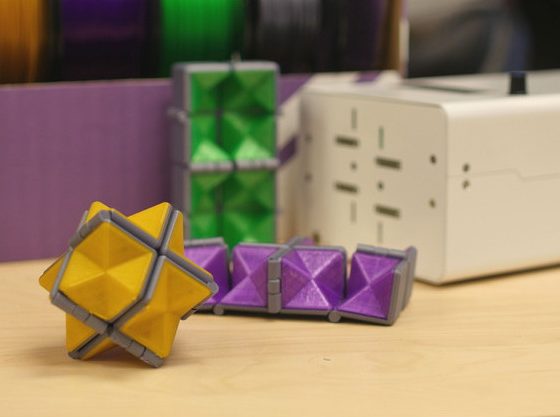 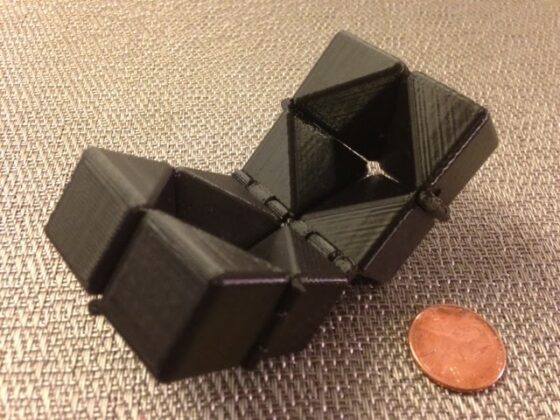