Today we’ll start going through the knot conformations in the series we introduced yesterday. Before we begin, let’s go over some of the basic notation and ideas of knot theory.

Knots are embeddings of S^1 into S^3, if you’re a mathematician. If you’re a normal person then you can think of knots as pieces of string that are tied into some knotted shape with their ends then fused together. Knots are named according to their position in the standard Rolfsen table, with names like 3_1, 7_2, and 8_19. The first number in the name represents the minimum possible number of crossings for a projection of the knot, and the second number is just its position in the table among knots with the given minimum crossing number. For example, 8_19 is the nineteenth knot in the list of 8-crossing knots in the Rolfsen table.

The unknot is the simplest type of knot; think of it as a piece of string with its ends joined together, with no knotting along the way. In other words, the unknot is just a circle. It requires no crossings, and it is the only knot that can have a 0-crossing projection, so its name is 0_1 (the first, in fact the only, 0-crossing knot).

When we say “the” unknot we actually mean a whole collection of things: anything that can be continuously deformed into a simple circle. So the unknot could sit in space as a perfect circle, or a much larger circle, or an oval, or curving around in any way we like – as long as it can continuously morph into a circle shape without breaking or tearing. One thing we often try to figure out in knot theory is whether or not a given knot is in fact the unknot. Sometimes this is easy to see, and sometimes it isn’t. For example, the first knot conformation pair in our series is the standard circle form of the unknot together with a much more interesting, non-trivial-looking conformation. If the green knot on the right were made of a stretchy rubber band, we would be able to move that rubber band around in space without breaking it until it was in the shape of a circle. Can you see how? If you like questions like this then you might enjoy the mathematical field of topology, where two objects are considered equivalent if they can be morphed into each other without tearing or gluing (for example the famous donut = coffee cup example). 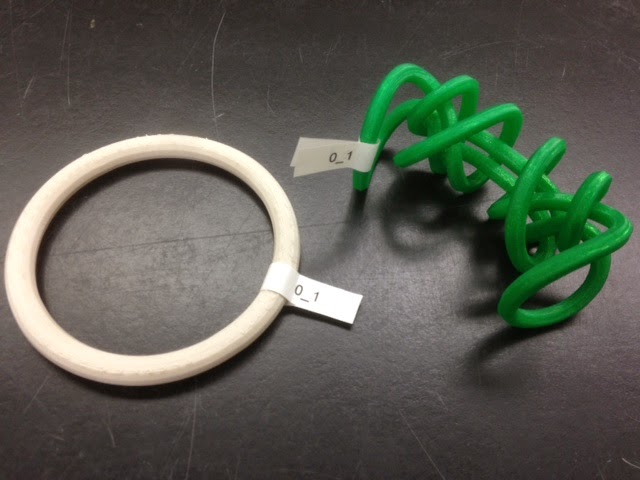 Settings: MakerBot Replicator 2 on .3mm/low with the support-reducing slicing profile from Day 110.

Technical notes, KnotPlot flavor: Both of these knots were made by JMU student Kirill Korsak using the excellent program KnotPlot. KnotPlot is free, but to export 3D-printable files from it you will have to pay the registration fee. Here’s how Kirill describes making these knots with KnotPlot: