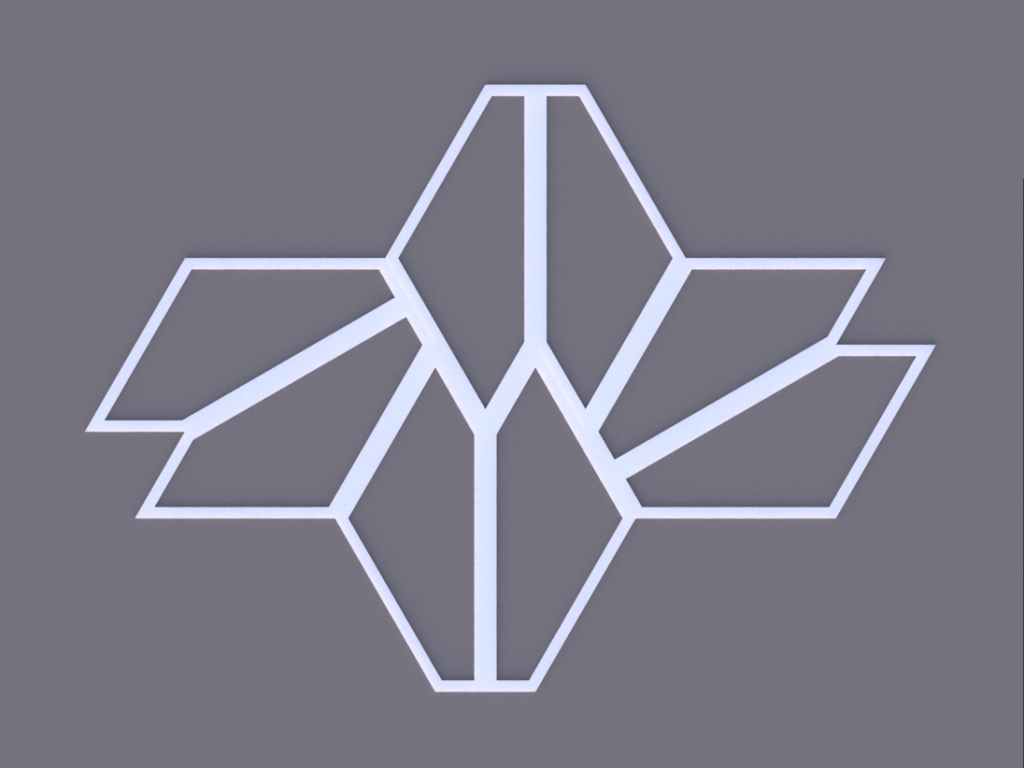 Some years back we created the Pentomizer, a customizable model on Thingiverse that could generate all possible irregular pentagons that tile the plane. At the time, we went a little crazy with the pentagons, using them to make thermoform bracelets, 3D wallpaper, desk organizers, fancy silver bracelets, stainless steel desk toys, and wall art: 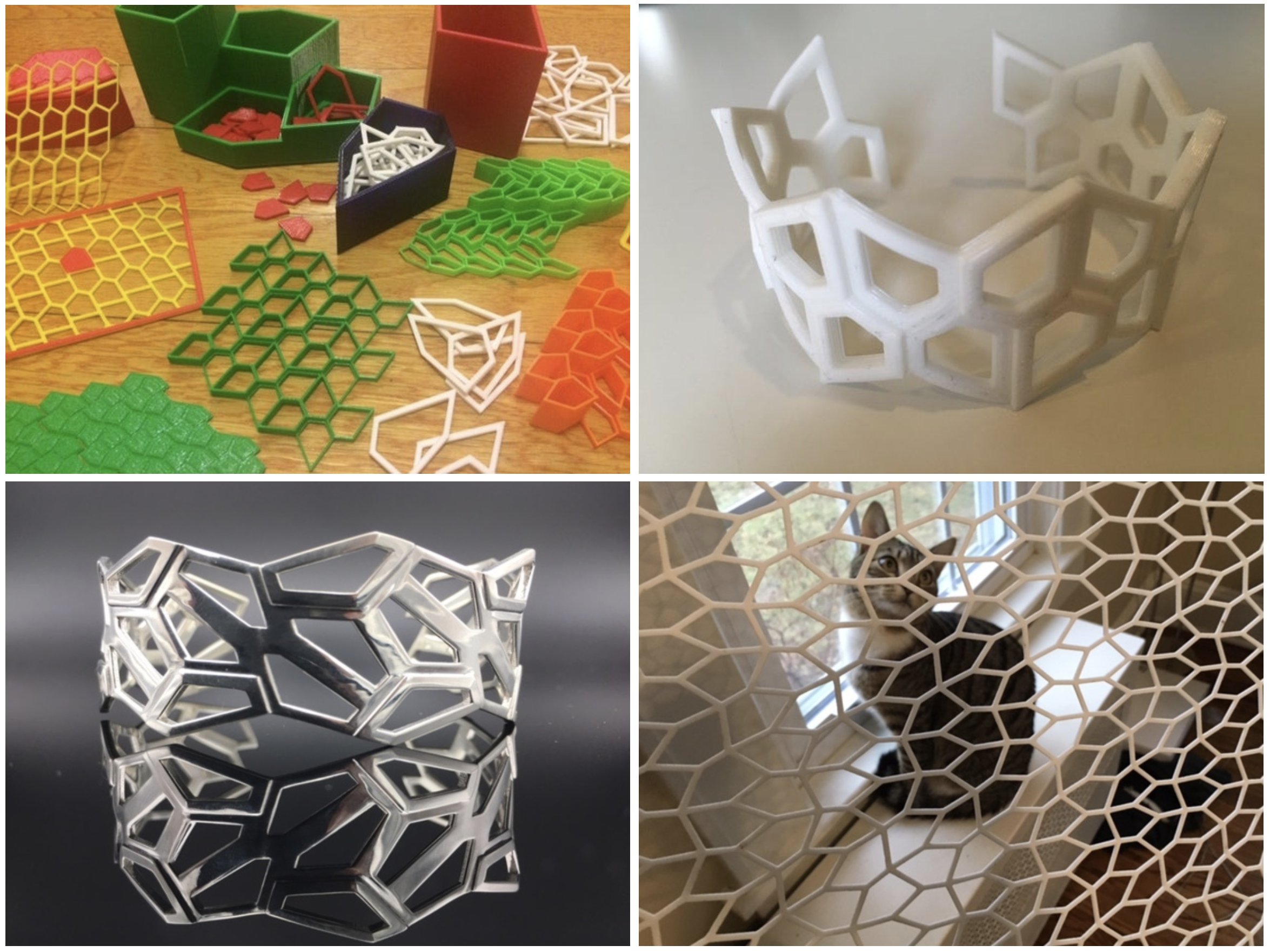 One thing we hadn’t done until today is create bulk sets of all fifteen types of tessellating pentagons that people could order from Shapeways. We’ve been avoiding doing so for a long time, and you’re about to see why. First, because they are expensive to order as prints. Second, because a lot of work goes into creating, packaging, creating media for, and setting up 15 different products on Shapeways.

Today, we finally get it done; in this post we’ll walk through the surprisingly lengthly process of turning a model into a released product/design on Shapeways and Thingiverse, using these pentagon sets as an example.

I made some pentagons! You can buy pre-printed sets at Shapeways or download free files from Thingiverse and 3D print or lasercut them yourselves. If you want to see what it takes for me to prep models for posting on Shapeways and Thingiverse, scroll down. :)

If we say that a 2D shape “tiles”, or “tessellates”, the plane, we basically mean that you could use that shape to make bathroom or kitchen tiles that fit together exactly on the wall. A regular pentagon (with all sides and angles the same) can’t be used as bathroom tiles, but some irregular pentagons (with possibly different sides and angles) can. For example, here is a particularly beautiful pentagonal tiling from Deke’s Techniques: 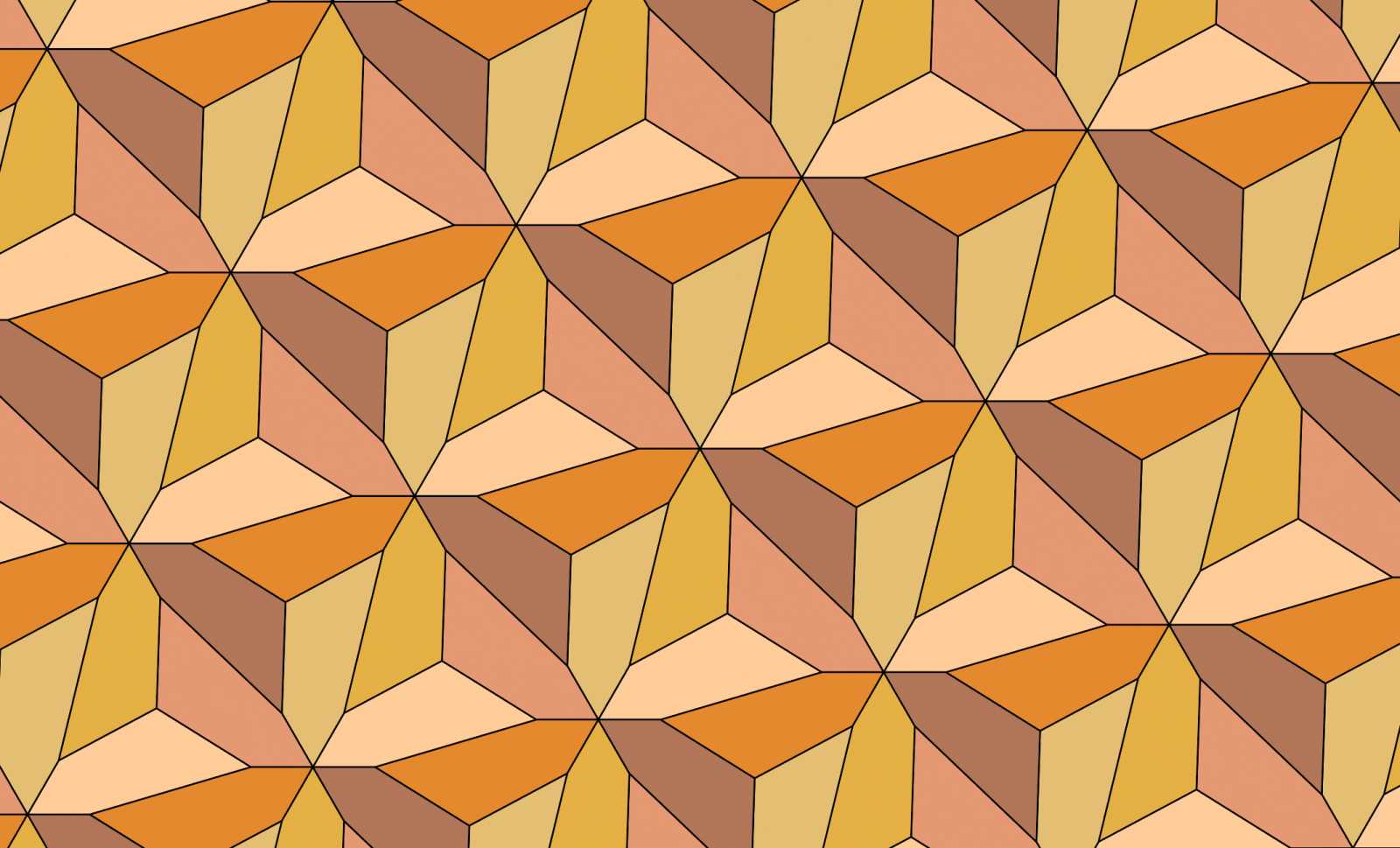 In 2015, mathematicians discovered the fifteenth type of tessellating pentagon, and not long afterwards it was shown that it was the last — in other words, there are exactly fifteen families of tessellating irregular convex pentagons. Here’s what they look like (image credit to Ed Pegg): 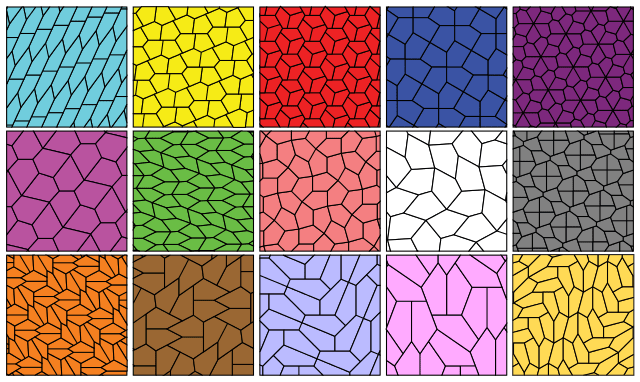 What we’ll be creating today is fifteen bulk sets of tiles suitable for printing at Shapeways, one for each of these fifteen types. We’ll also make some larger multi-pentagon units for each type of tessellation. Finally, we’ll make a home-printable set of these same pentagons that we can give away for free at Thingiverse.

We’ve made individual pentagon pieces before, but for this project we decided to remake new STL files for all of them in a more consistent way. First, we chose representatives in each family to look as much as possible like the representative pentagons shown on the Wikipedia page on Pentagonal Tilings. Second, we manually adjusted the scale of each pentagon so that all 15 pentagons would have the same area and therefore look and feel like they are the same relative size, even though they have a range of different shapes.

We made the area calculations in OpenSCAD by marking the vertices of each pentagon with different size spheres to tell them apart, and adding up areas of triangles to get the total area. Here’s what that process looked like when we scaled the Type 11 pentagon model: 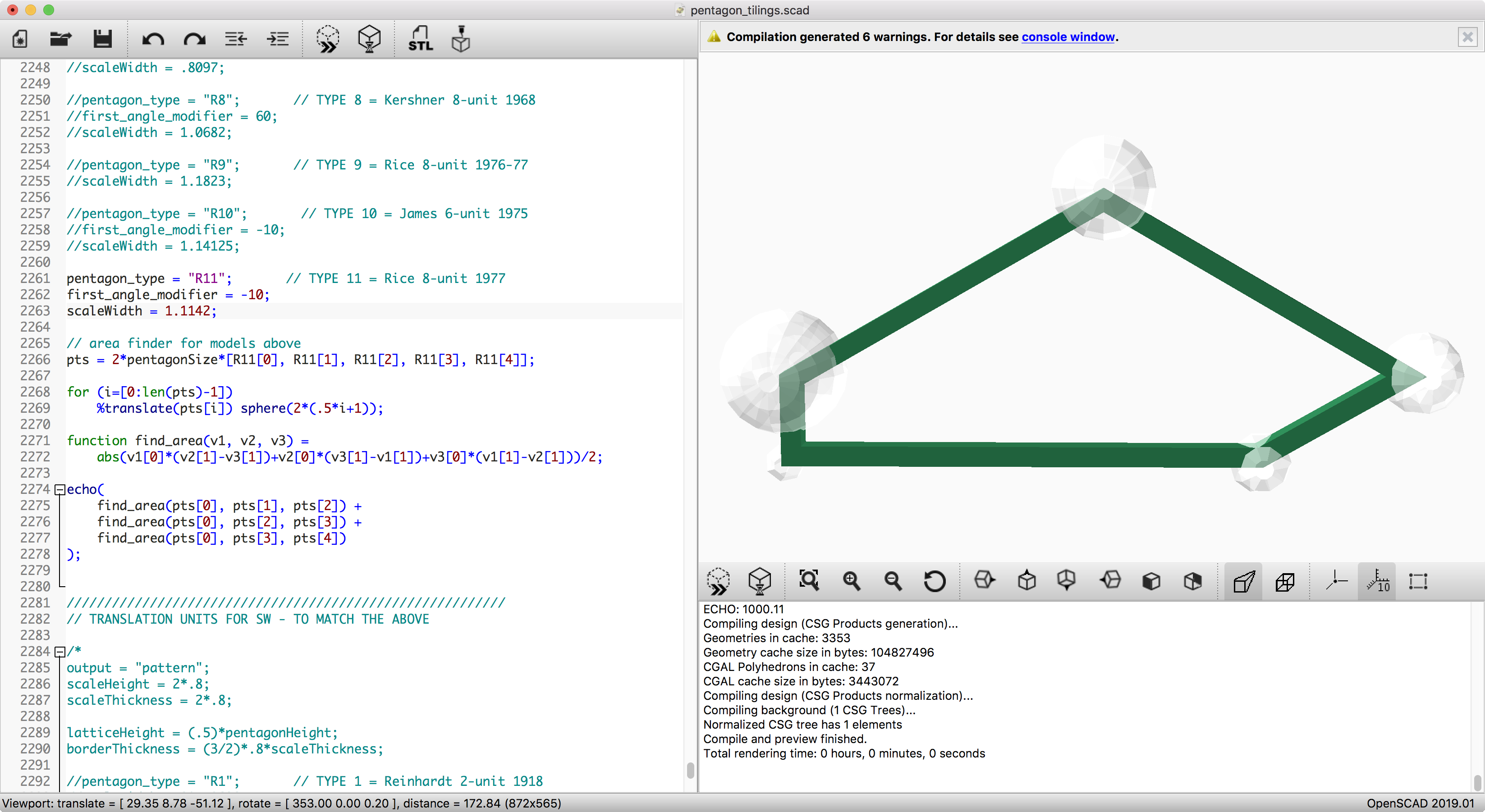 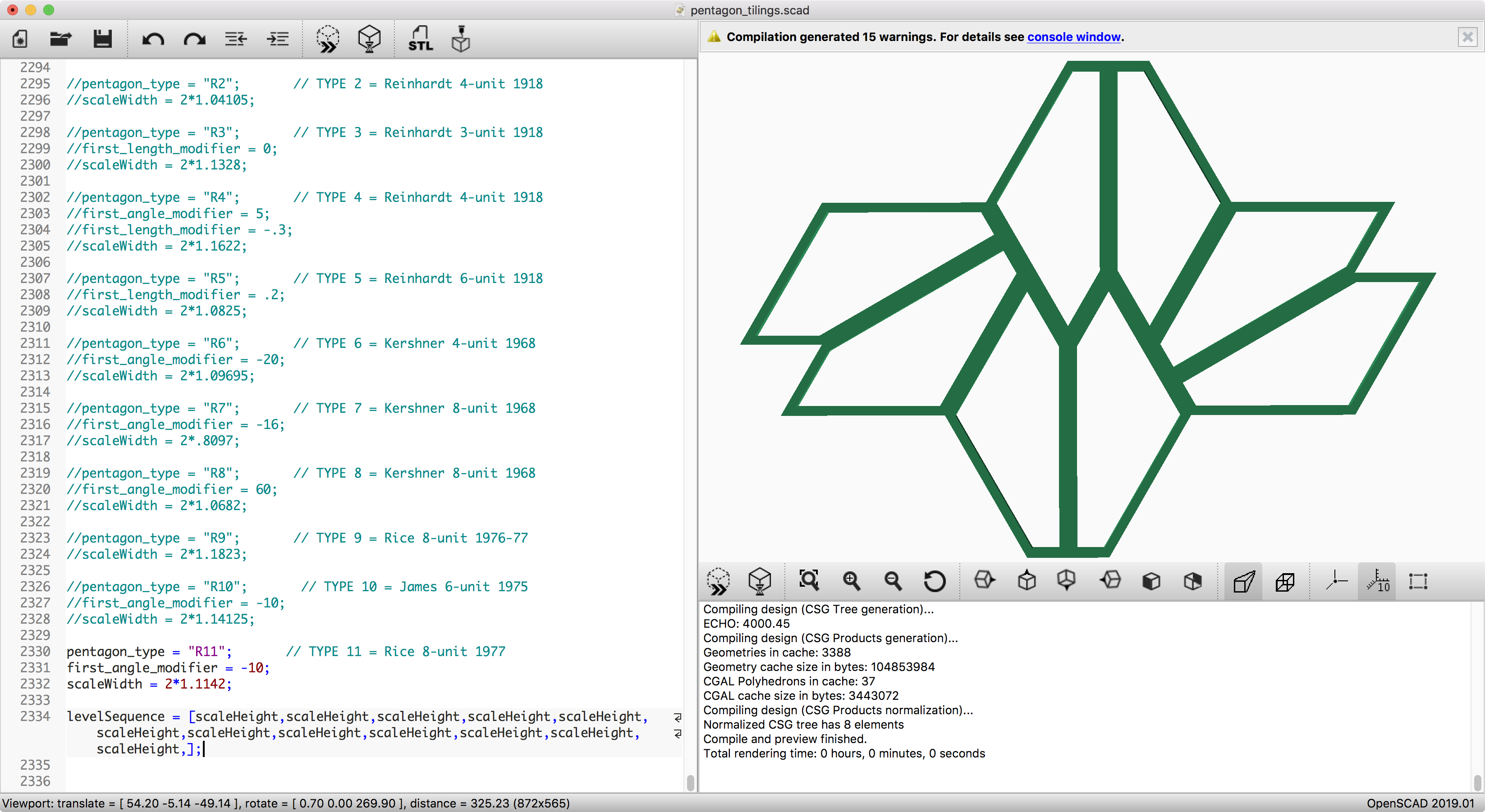 Joining sets of pentagons with Tinkercad

Shapeways is a 3D printing service from which you can order prints and have them mailed to you. We’re going to offer our pentagon sets for printing in the least expensive Shapeways material, Versatile Plastic, which has a per-part charge. If we loop multiple pentagons together then they will stay together during the printing and post-processing cleanup stages, and therefore can be considered just one part. This will make them a lot cheaper. The way you combine things also matters; certain arrangments take up more machine space than others during the printing process.

We figured out the absolute closest we could pack the models together, and the cheapest types of arrangments, and then stacked them into looped-up sets of two dozen pentagons each, in Tinkercad: 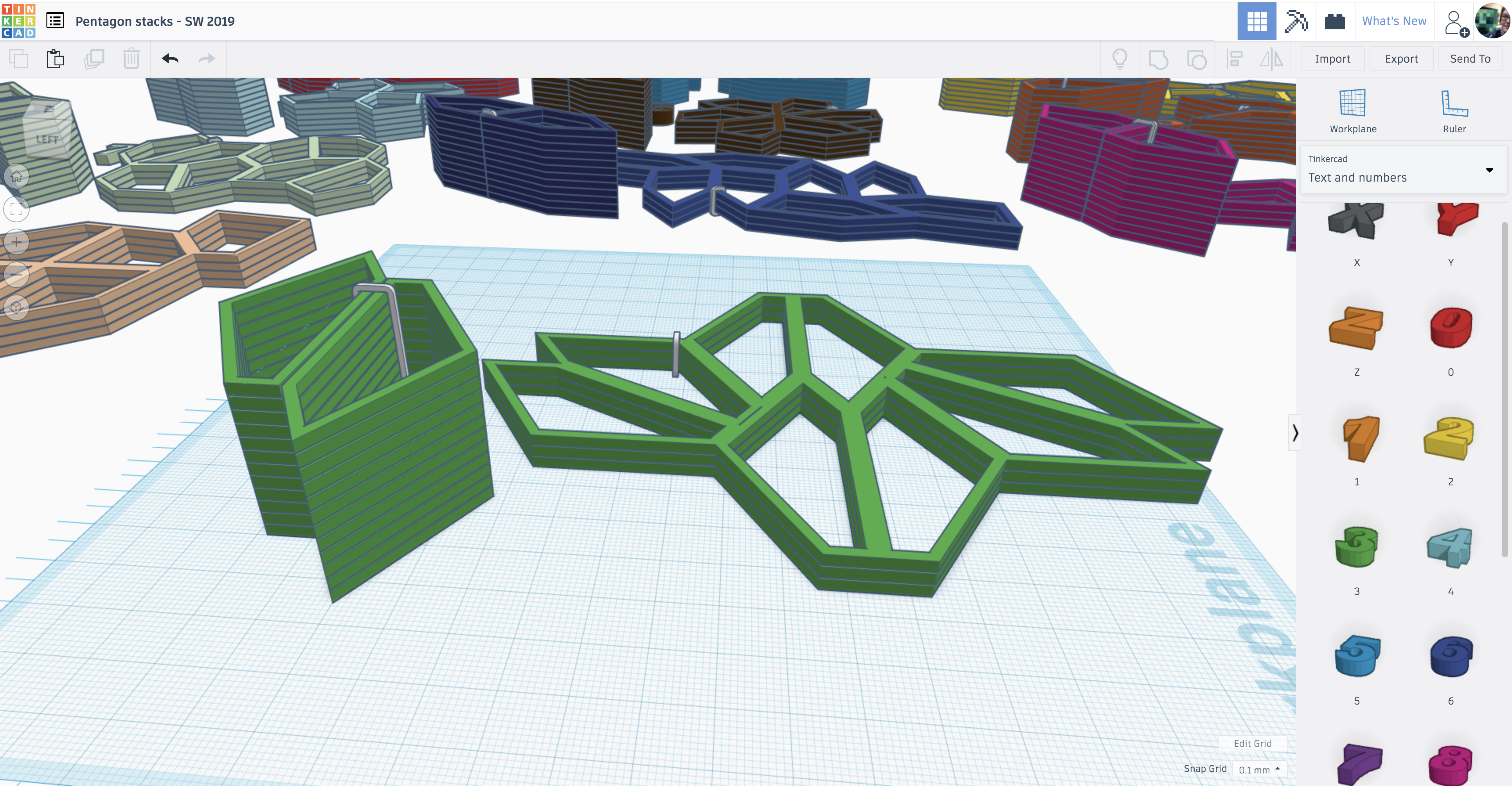 For the most part this process was straightforward (but tedious!), with the exception of a couple of pentagon combination models that had damaged meshes for some reason. After some repairs in Meshmixer and MeshLab we got everything working, and output each set of pentagons as an STL file suitable for sending to Shapeways.

Ideally, each of our thirty (!) Shapeways products would have a photograph as its main image, but to order Shapeways prints of all of the sets and all of the multi-units just to photograph them would be very pricey. It would also delay us about two weeks. I’ve printed similar things at Shapeways before, so I’m pretty confident that the pentagon sets will work. (I just ordered a couple of sets to be sure, so I’ll update if anything is amiss!) In this case we figured it would be safe to use some nice digital renders instead of photographs of actual prints.

Shapeways does make renders of your model in each material you make available, but the renders aren’t that great. You can do much better using Fusion 360‘s simple render engine. We made renders for each individual pentagon model, and also for the multi-units. Here’s our Type 11 multi-pentagon unit after the rendering process has completed: 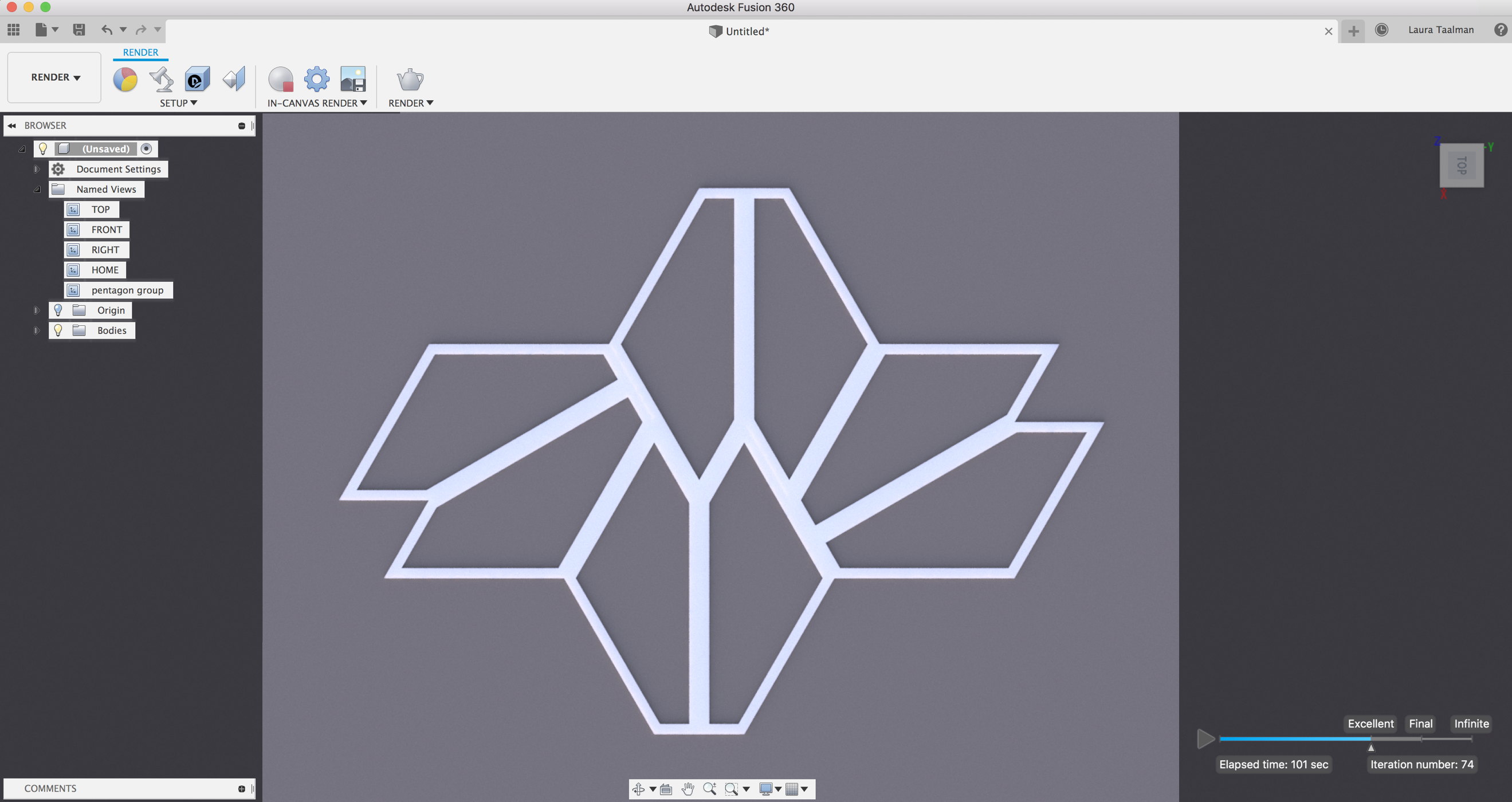 Since the customer will get many copies of the models in each order, these renders might be a little bit confusing. To try to make things clearer we will add some numbers to each image to indicate how many copies will be in the order. We used Google Slides to quickly create number multipliers in the font we use for our website and logo, which is Raleway. Then we used GraphicConverter to combine the number multipliers with our render images: 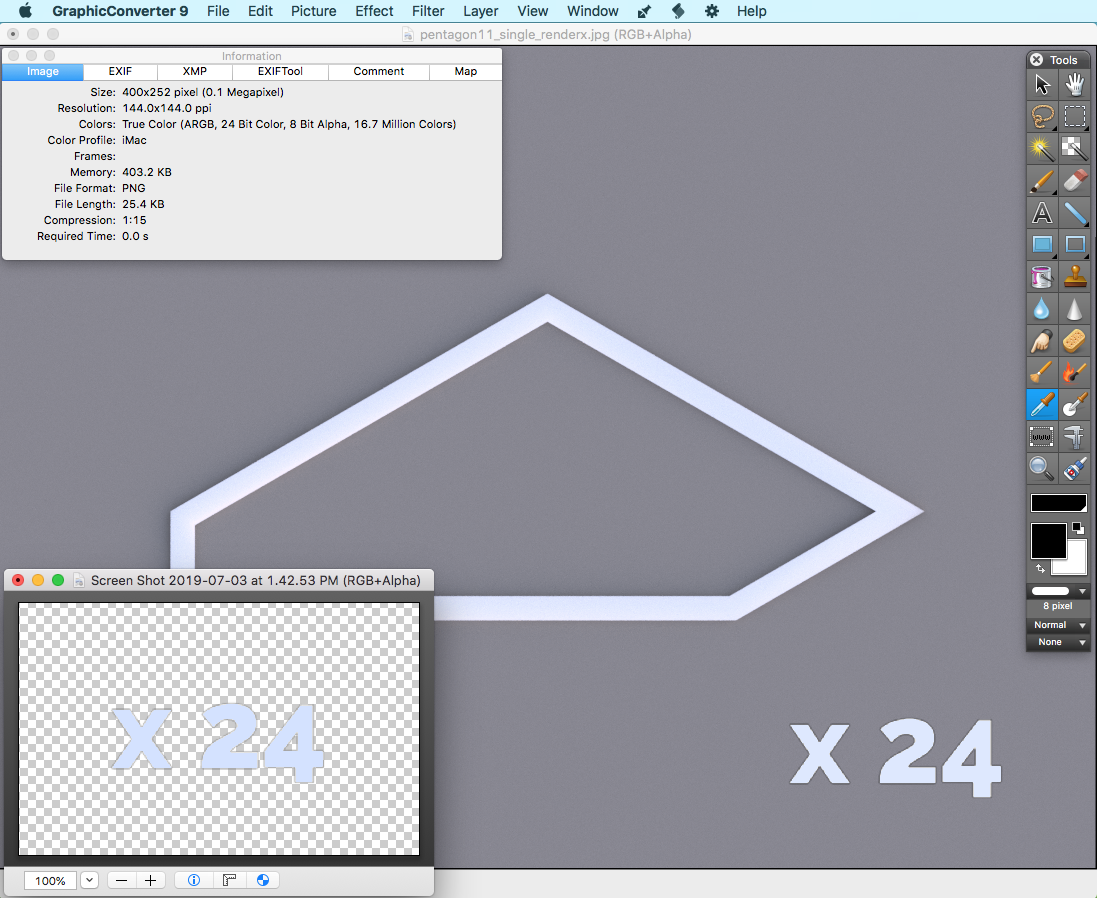 After doing everything above for each of the 15 pentagons, we have all the media we need to create 30 Shapways products. Now comes the really tedious part… First, we upload the STL files: 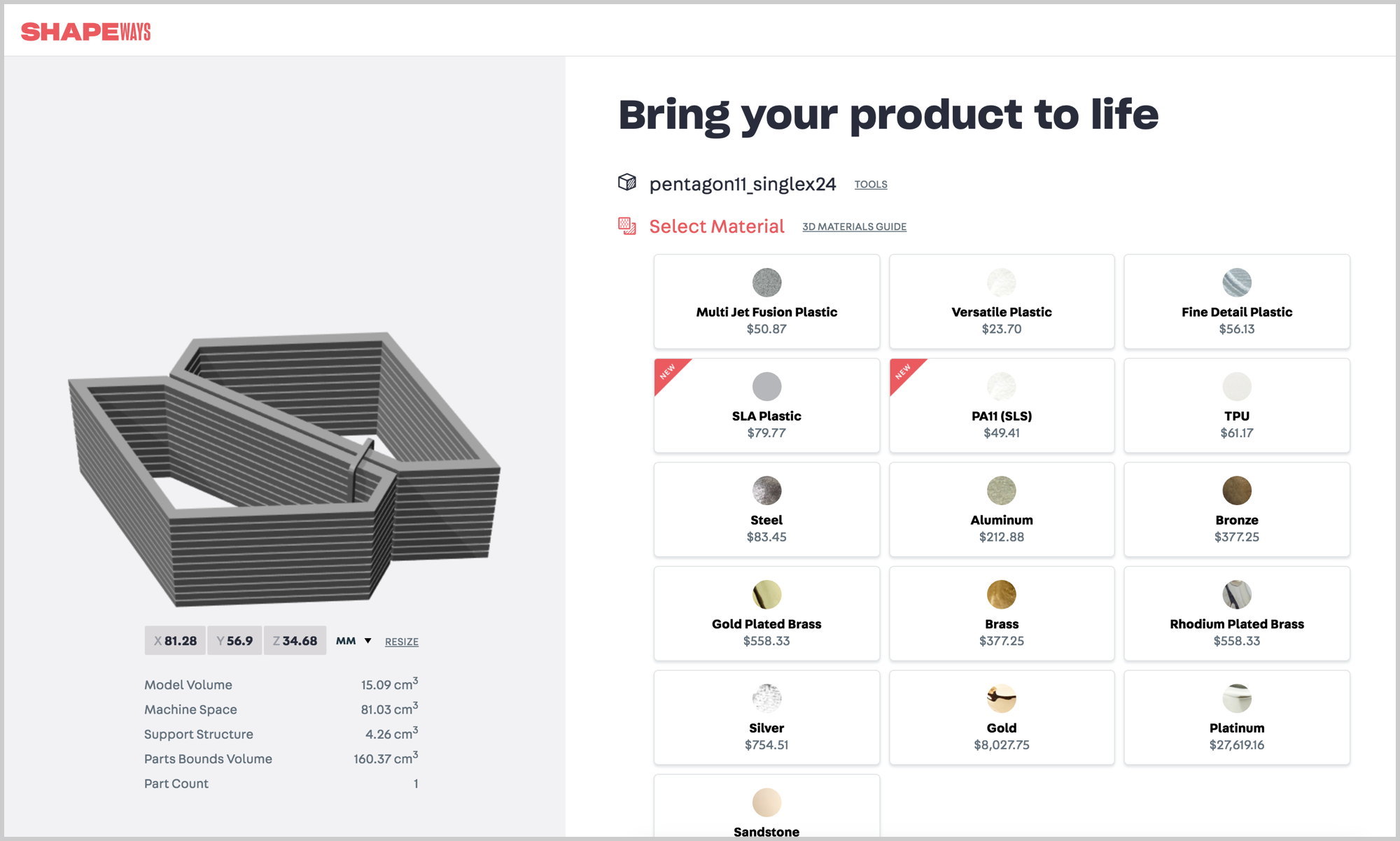 Then we create a product from this model and start filling in details, tags, category, materials, pricing, and images. Here’s just the top of the editing form: 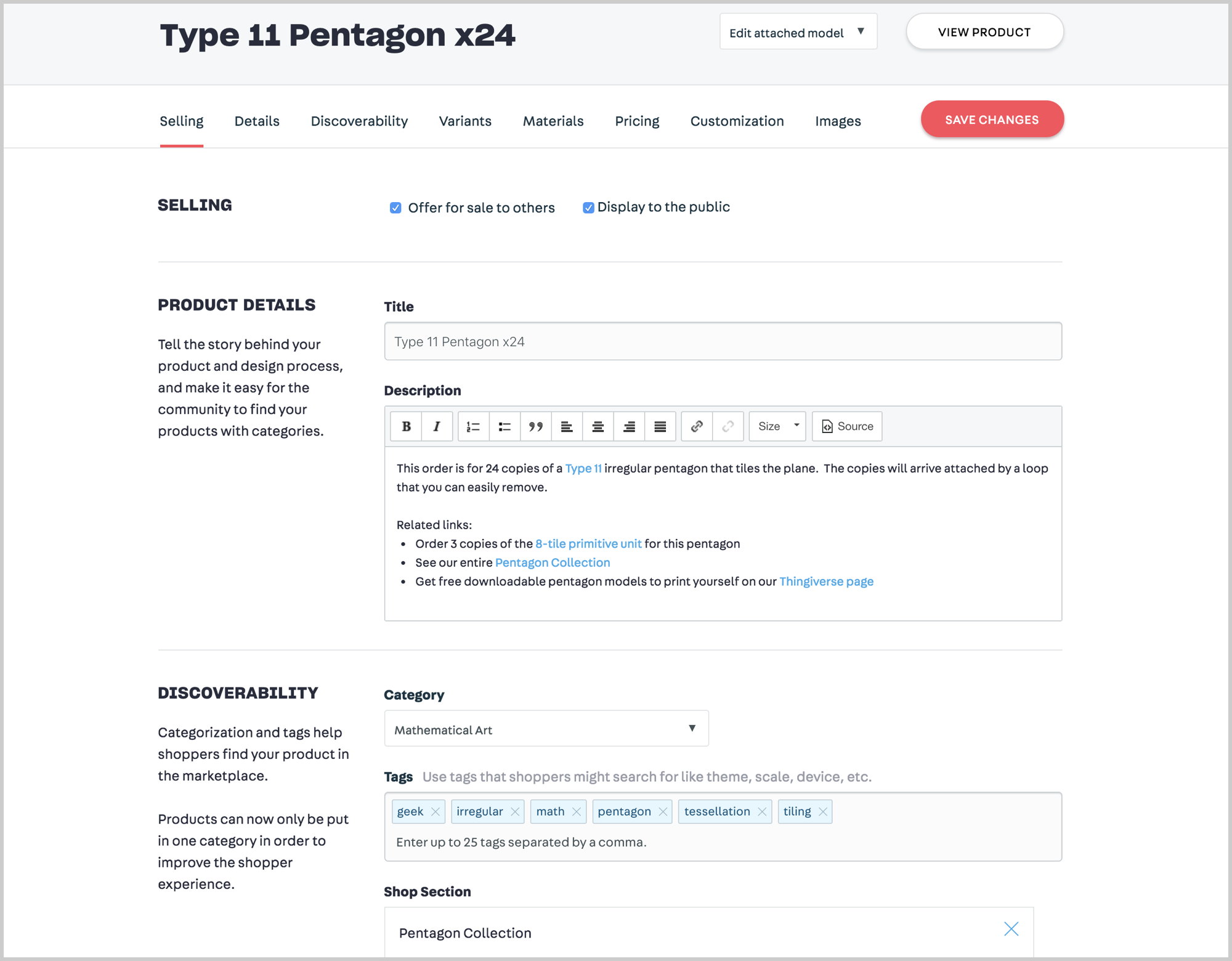 When everything is ready we turn on the radio buttons that make the object “for sale” and “visible”, and we have a product! 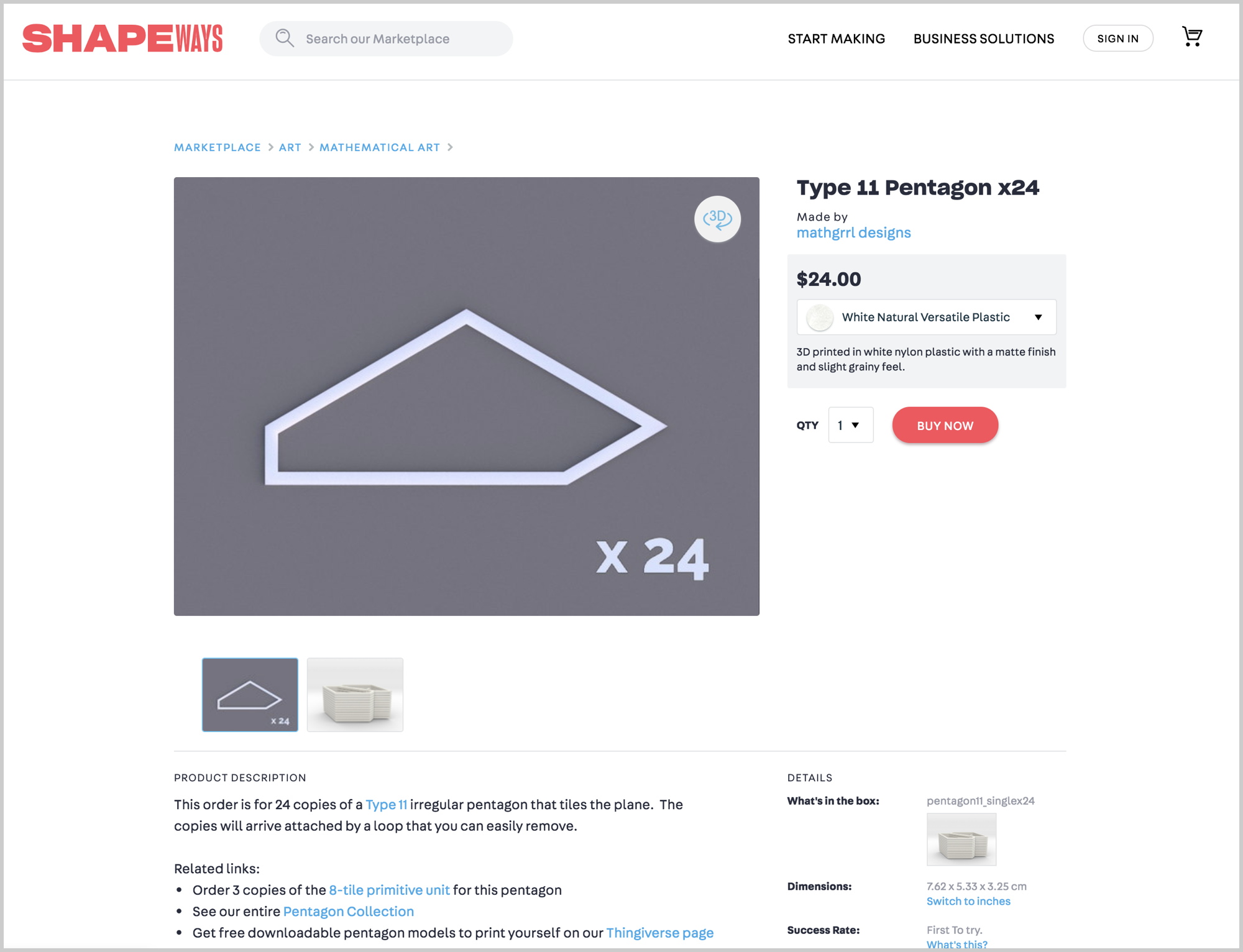 We did this for all 15 pentagons, and then did it 15 more times for each of the multi-pentagon units: 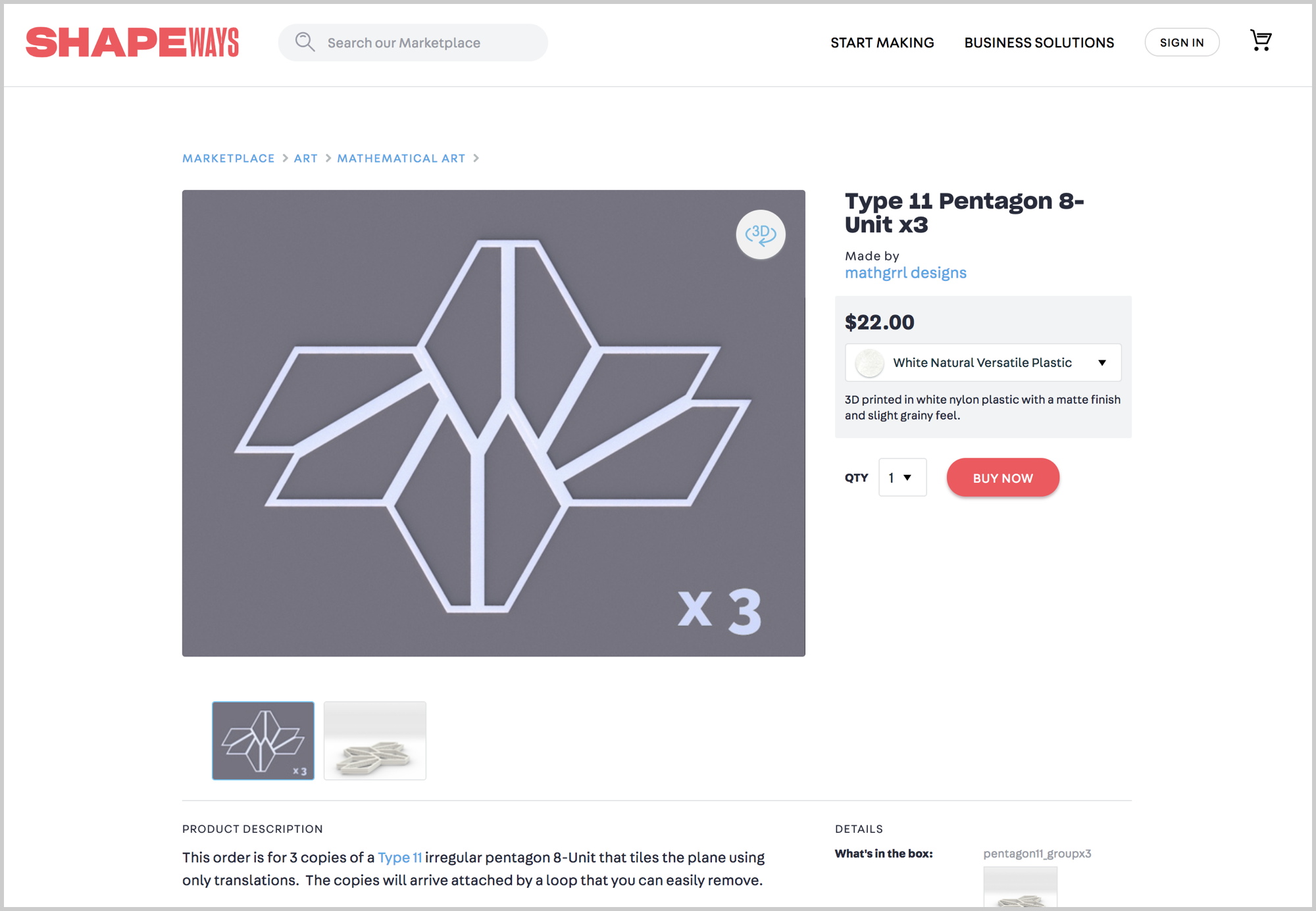 We’re done!  Except… despite everything I did to try to keep the Shapeways manufacturing costs down, these models still seem really expensive to me. Since people might want these for education, and basically since I am the worst businessperson ever, I also want to make the files free to download so that people with 3D printers can just manufacture their own.

As a first step to making the files free to download, I did a test print of each pentagon: 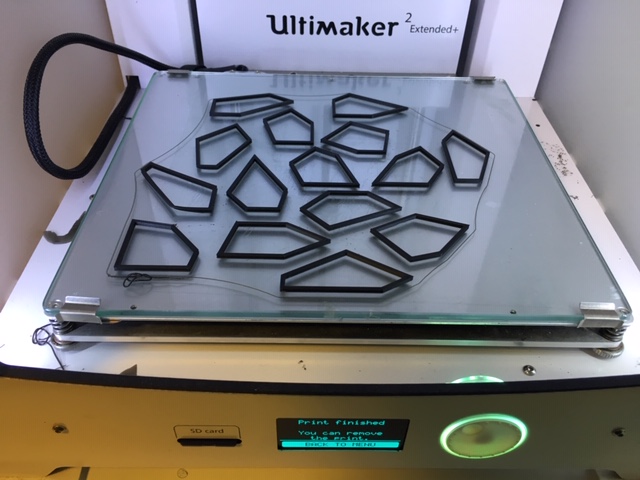 After putting the prints in order from Type 1 to Type 15, we arranged them in the lightbox. The light is off here, because otherwise all you would see in this picture is that really bright light! 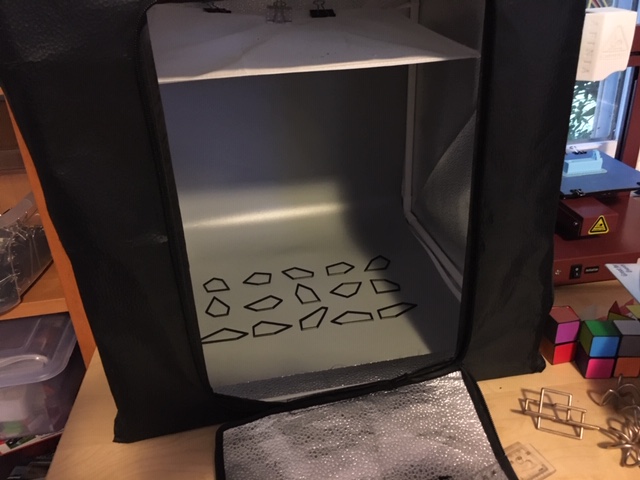 It’s not perfect, but we got a fairly good picture of the 15 pentagons just using our iPhone and this lightbox: 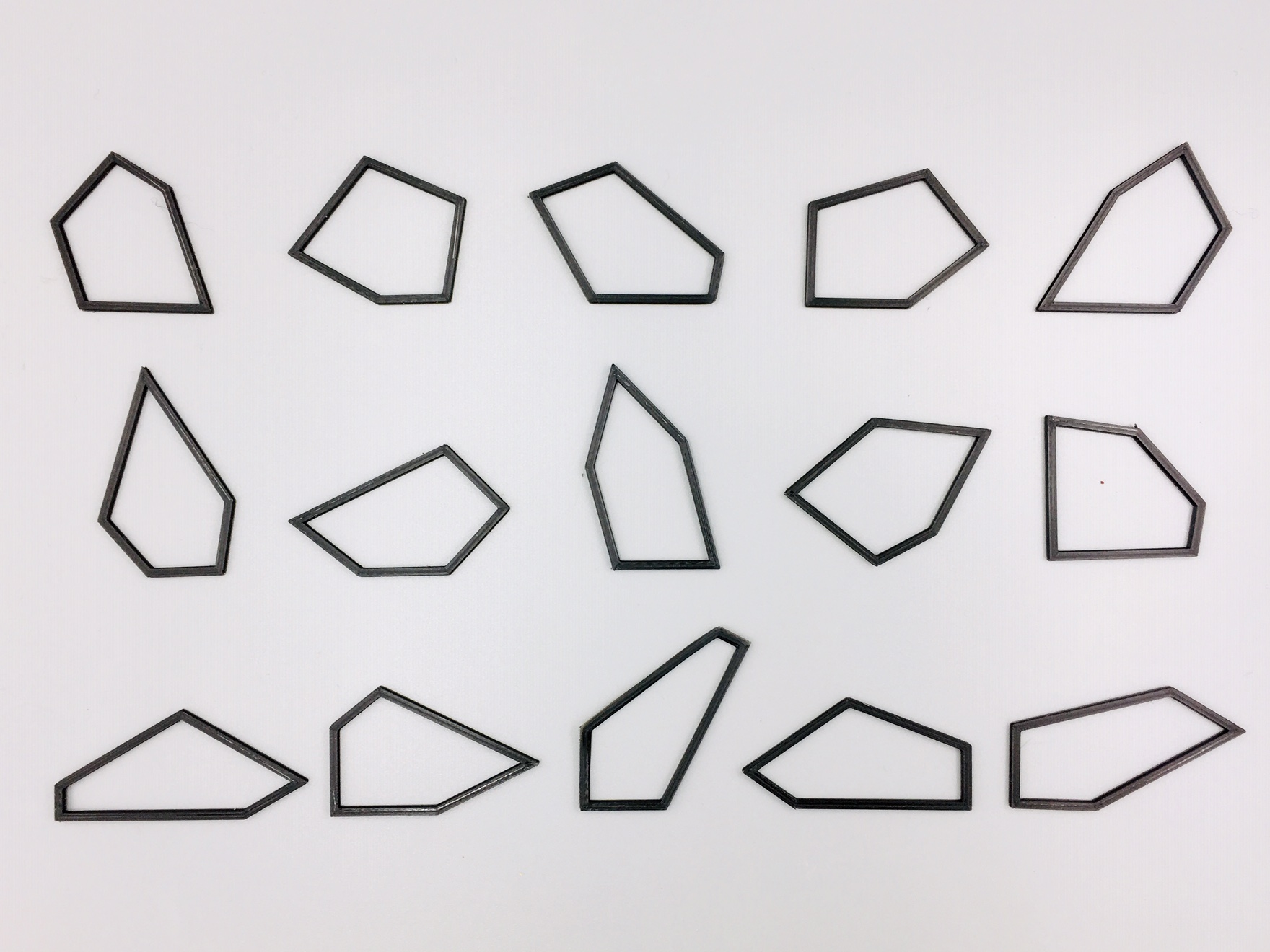 We also printed one of the multi-pentagon units (this is Type 9) and got a real-world photo with some nice shadows: 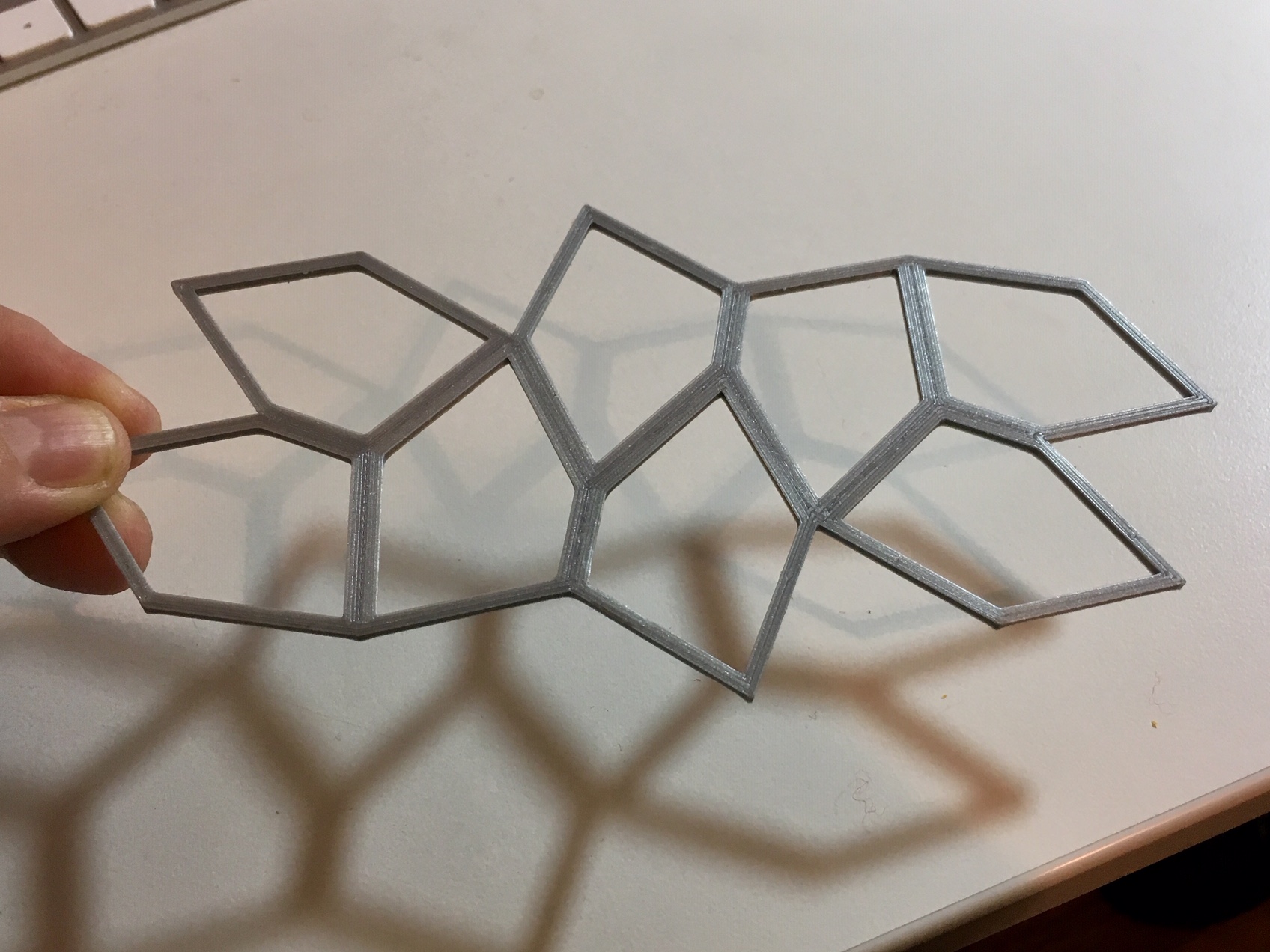 Armed with files and images, we are ready to upload to Thingiverse! After selecting “Create a Thing” from the menu bar, we get an edit window where we can upload all our model and image files and enter title, description, tags, category, and so on. Here’s just part of that form. Note that we can tag this Thing as a remix of our previous “Pentonomizer”: 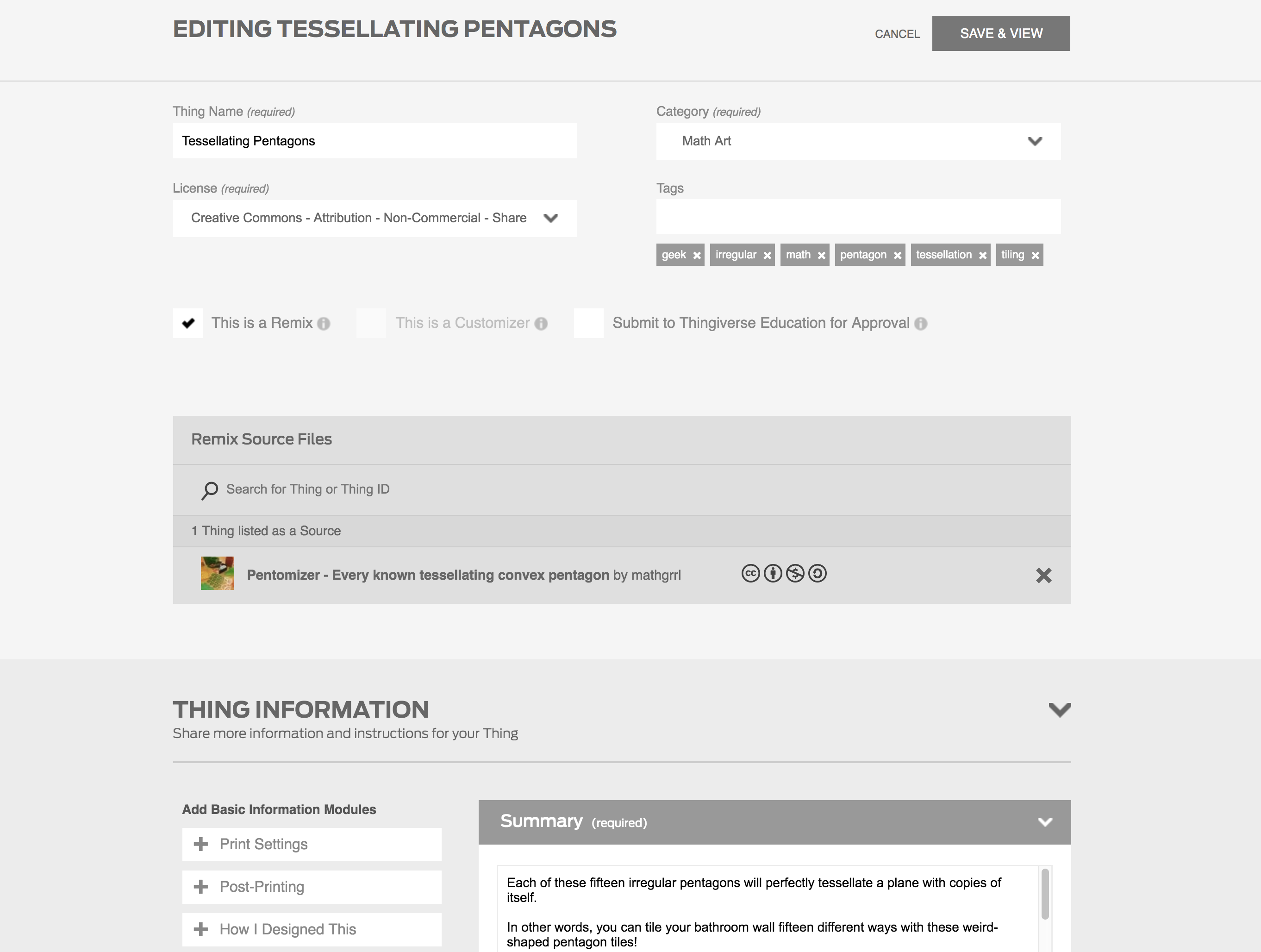 Here’s what the Thingiverse listing looks like when it is complete. Now everyone can get the files for free! 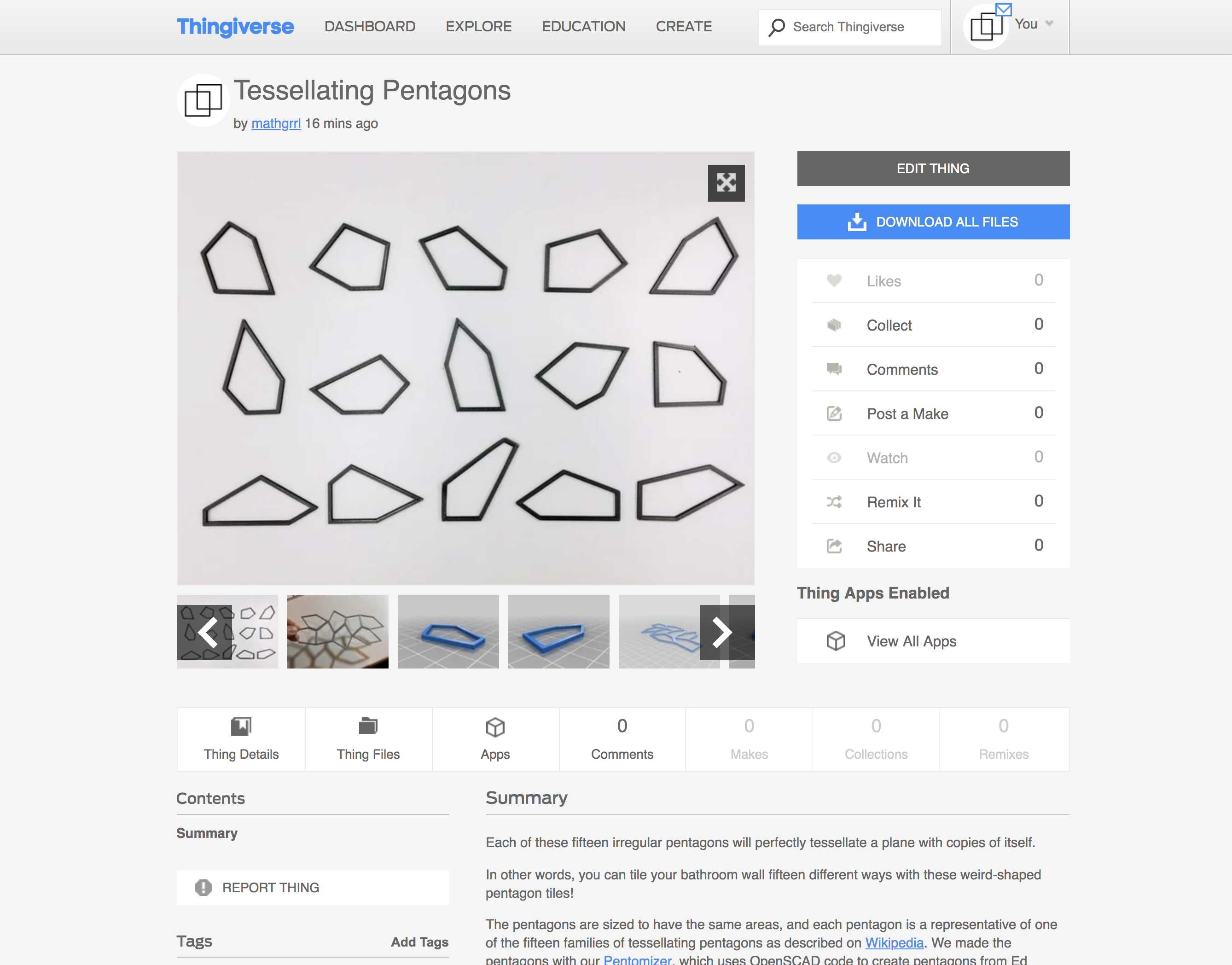 Have fun printing pentagons and/or turning your own models into products and Things!  :) 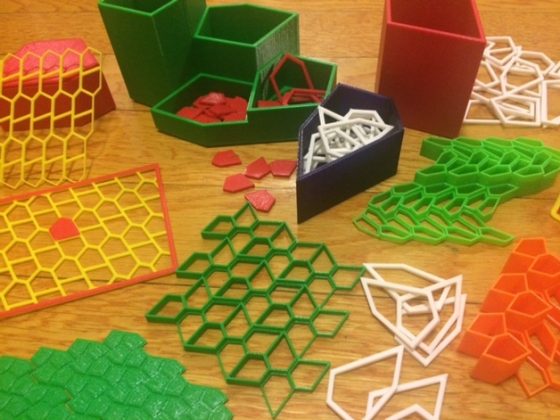 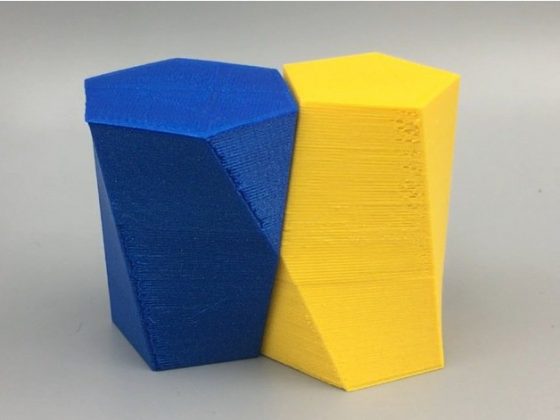 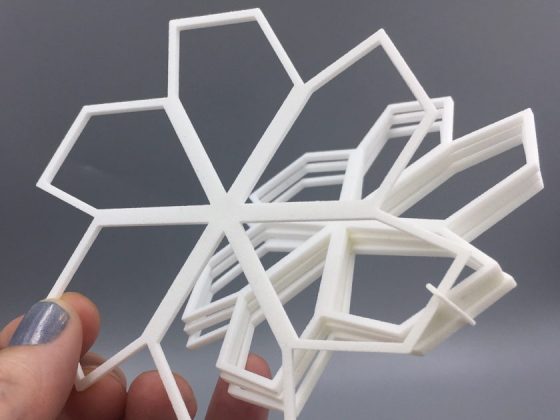